Tactical Tuesday Free Poker Training Video: Soft Skills That Will Help You Dominate On The Felt 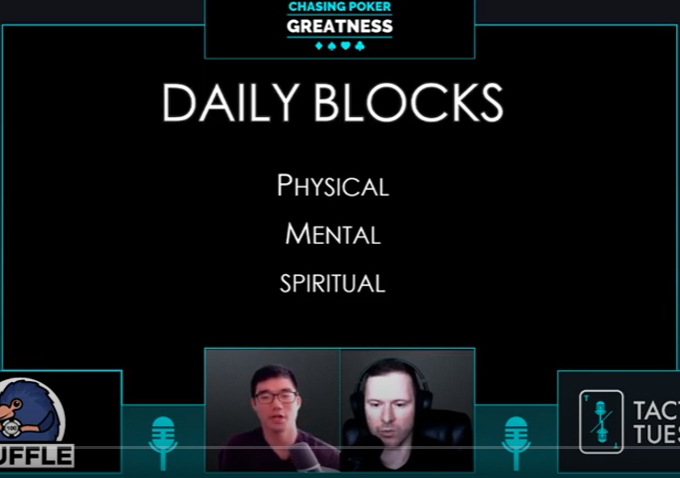 On this week’s Tactical Tuesday, Coach Brad and Jon will be providing an overview of the non-technical skills necessary to compete at a high level. These are the skills that CPG’s Elites work to improve on a daily basis and serve as the core blocks of the Elite program. For poker performance upgrades that create a more resilience mental game, this is the Tactical Tuesday for you.

In today’s episode of Tactical Tuesday, Jon asks Coach Brad some of his favorite Chasing Poker Greatness questions, including:
– Who was the biggest influence in you becoming a poker professional? – What are the stories behind your least favorite & most favorite poker sessions? Coach Brad takes a trip down memory lane that covers missed flights, walking 6 miles to the post office in the dead of winter (uphill both ways), losing most of his money on Earth because of a real estate deal gone awry, and trying to put his cape on and make a hero call on the river with third pair with his case money. Enjoy the show and don’t forget to rate & subscribe.

On this week’s episode, Coach Brad and his student Jon discuss Jon’s perception of online poker before Jon began playing online in the summer of 2020 and how those perceptions have changed as Coach Brad has guided Jon up through the stakes. Find out how someone who was initially terrified of playing $200NL is now crushing $1000NL just 6 months later and what you can do to improve your poker game to have similar results.

In this week’s (Not So) Tactical Tuesday Coach Brad & Coach Thomas tackle mindset and risk. What does it mean if you’re too risk averse or too risk inclined? How aggressive should you be with your bankroll? Can being too nitty actually hold back your progress? Coach Brad & Coach Thomas share their thoughts as well as some behind-the-scenes stories of their personal poker journeys.