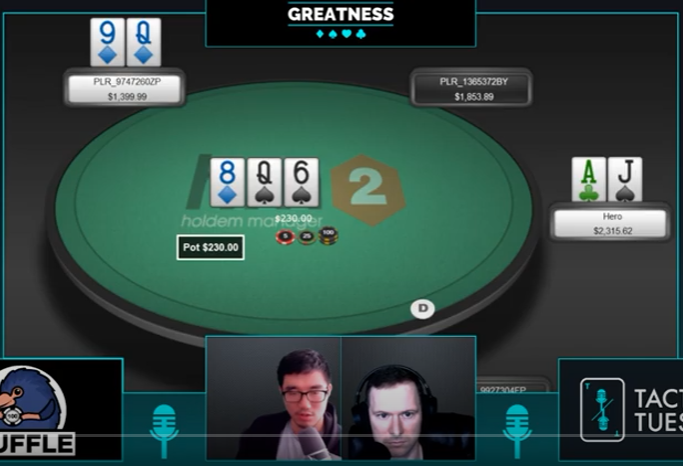 Last Thursday, during a live streamed cash game session, Coach Brad fired up a couple tables of 1kNL and was coincidently placed at a few of the same tables occupied by Jon. Unbeknownst to both student and coach, they battled each other in the anonymous games of Ignition, only realizing that they had played each other during a hand review session days later. Hit play to find out who came out on top in this Coach vs. Student showdown!

Coach Brad describes the five courses (including one that’s free!) that are currently being offered at Chasing Poker Greatness. Tune in to learn what sets CPG courses apart from every other piece of training content on the market and how these courses can take your game to the next level.

Tactical Tuesday Free Poker Training Podcast: The One Where Jon Gets Mossed On A Monotone Flop

Coach Brad and Jon return for another round of hand breakdowns on this week’s Tactical Tuesday. In this episode you’ll hear about two hands Jon played recently at $5/$10 6-max cash. Both hands involve tricky monotone flops and both hands result in maximum pain for one of the players involved. Will Jon be the one dishing it out or will he be the one left with nothing but virtual felt in front of him? Find out on today’s episode!

In today’s first segment Coach Brad and his student Jon share their opinions on whether or not they think the Doug Polk vs. Daniel Negreanu high stakes heads-up challenge was ultimately good for the game of poker.

After the jump they give their opinions on ways they think these challenges could be improved upon moving forward into the future.

– Lots of hype for poker.

– Hole cards down sucks as a viewer.

– It wasn’t based on skill or finding out who’s better.

– More incentive for strategic transparency by sponsors or outside sources.

– Hole cards up is absolutely necessary.

– Formal press conferences after each session.

On this week’s Tactical Tuesday, Coach Brad and his student Jon take a look at a couple of hands posted in Greatness Village. The first hand features Coach Thomas choosing to take an unorthodox line from the big blind against the button at 500NL. In the second hand, a villager raises preflop, bets the flop and the turn with a combo draw and arrives at the river with absolutely nothing. Tune in to find out whether you should be bluffing or giving up in those situations. If you’d like to potentially get one of your hands reviewed by Coach Brad on Tactical Tuesday sign up for the VIP Newsletter at https://chasingpokergreatness.com/VIP Going VIP will also get you access to Poker Power Hour, a weekly group coaching session hosted by the coaches of Greatness Village.

Coach Brad and his student Jon return for a third round of Tactical Tuesday. If you’ve ever been curious about the types of discussions that occur during Coach Brad’s coaching sessions, this week’s episode will provide a close look at just that. Jon shows Coach Brad two hands that he played recently at $5/$10 NL on Ignition, with both hands including at least one street of action where Jon had no idea what to do. Listen in as Coach Brad provides detailed analysis on each hand and leaves Jon with a much clearer plan for how to proceed facing similar situations in the future.