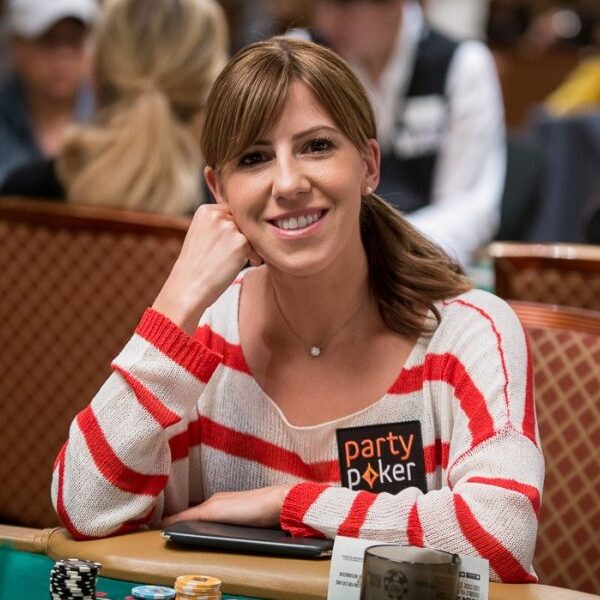 Today’s guest is PartyPoker pro and the current #7 GPI ranked player in the world Kristen Bicknell.

There was a hand Kristen played recently that I stumbled across on Twitter that shows you why she’s one of the best in the world:

With blinds at 15k/30k and a big blind ante of 30k, former CPG Guest Dara O’ Kearney min raises from UTG with KK sitting on a 2.9 million chip stack.

A loose passive rec that covers flats on the button, Kristen (Sitting on a 1.38 million chip stack) comes along from the SB, and the BB folds.

With 240k in the middle, the flop is Kd7h5c. Kristen checks, Dara checks, the rec bets 115k, Kristen calls, and Dara overcalls.

The turn is the 2d putting up a backdoor flush draw and with 585k in the pot, Kristen leads 220k into Dara and the rec.

Dara smooth calls with top set (the nuts) and the rec folds.

The river is the 7 of diamonds, completing the backdoor flush and pairing the board, Kristen bets 650k (leaving herself with 350k), Dara shoves, and Kristen folds getting 6.5-1 (Needing to be right only 13% of the time in order to profitably call).

Her hand, pocket 5’s for a full house.

I VERY MUCH wish we could have had the opportunity to discuss her thought process in the hand but, alas, I didn’t know of it’s existence until after we had finished recording.

However, I will give my thoughts and they’re fairly simple: Dara is simply NEVER bluffing here and Kristen doesn’t beat ANY of his value (K7, KK, or Quads).

The best hands Kristen beats are AA and AK, which are never shoving the river, and because Dara didn’t cbet the flop we can heavily discount his backdoor diamond draws (And, to be fair, he probably shouldn’t be shoving AdQd even if it is in his range).

So, the next time you get annoyed that folks aren’t folding enough in the games you play, try to at least be a little grateful that they aren’t Kristen Bicknell who is capable of correctly folding a full house getting 6.5-1 on the river.

Why Kristen HATES selling her own action and would never want a full-time backer.

Why asking for help and being vulnerable takes you way farther in life than always trying to be a stone cold killer.

Kristen’s thoughts playing the final day of the Shooting Star Classic, the last tournament before we were all sent to our rooms without a key.

So get ready, strap in, and get prepared for the perpetually GREAT Kristen Bicknell.

Click any of the icons below to find the CPG pod on the platform of your choice. Then sit back, relax, and enjoy my conversation with Kristen Bicknell on the Chasing Poker Greatness Podcast.

Thanks for reading this transcript of Chasing Poker Greatness Podcast Episode 061: Kristen Bicknell