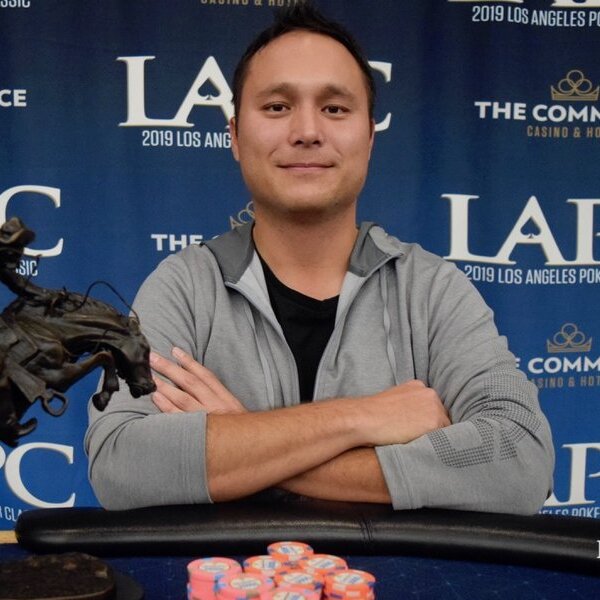 Today’s guest on CPG is a high stakes cash game beast with over $2 million in live MTT cashes, and one of my personal favorite humans in the poker world, Jesse Yaginuma.

You may recall Jesse being mentioned in a story recent CPG guest Justin Saliba told about the $5,500 High Roller Online WSOP Freezout event where in a very strange twist of fate 3 out of the 10 or so guys in a group chat managed to be the last three players remaining in the tournament.

They had planned to meet up and play soccer the next day, and when Jesse busted out in third place he quipped, “You boys better bring your shin pads tomorrow.”

This, to me, is a pretty typical experience with Jesse.

On the green felt he’s about as tenacious and unflappable as they come and, off the felt, he’s just a laid back, hilarious dude that’s as cool as they come.

In my mind, all of these are very important ingredients in my personal recipe for live poker greatness.

It doesn’t hurt that he’s also one of the most talented poker players I’ve ever had the good fortune of going to war against.

In today’s episode with Jesse Yaginuma he’s going to tell you poker stories that are near and dear to his heart, what he’s been up to since coming onto CPG almost two years ago, how he goes about addressing and plugging weaknesses in his poker game, and much, MUCH more!

So now, without any further ado, I bring to you an amazing human being who’s a genuine poker talent… the one and only Jesse Yaginuma.

Click any of the icons below to find the CPG pod on the platform of your choice. Then sit back, relax, and enjoy my conversation with Jesse Yaginuma on the Chasing Poker Greatness Podcast.

Thanks for reading this transcript of Chasing Poker Greatness Podcast Episode 179: Jesse Yaginuma